Oatmeal is one of the healthiest breakfast foods there is.  My kids LOVE it.  I love it too, especially in these cold winter months.  Nothing says winter like a hot bowl of oatmeal with butter.  At one point, especially when I worked outside the home, I would buy the flavored instant oatmeal packets at the grocery store.  They were easy, convenient, and I could keep them in my desk drawer for a healthy breakfast at the office.

Once I began staying home, I figured I could just make my oatmeal from scratch like my mom used to.  It would save money, which was a big deal since I had just left my job, and making my own oatmeal would be a way to get more processed food out of our diet.  So that’s what I did.

I would make it on the stove according to the directions on the box.  The problem was that I was wasting half of what I was making each day.  So, I experimented, researched online, and found that I could make my own oatmeal packets at home.  This brings back the convenience factor as well as the customization of flavors.  You can play around with the flavors that you like, and I’ve added my favorite add-in’s below. 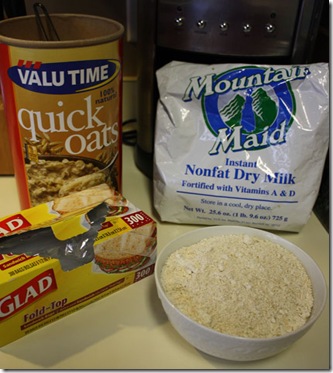 In a food processor, pulse 1 cup of oats until it turns into a powder.  Combined the processed oats with the whole oats. In a storage bag, add 1/4 cup of the oat mixture and 1 tablespoon of milk powder.  Repeat until you have used up all of the oat mixture.
When you are ready to cook your oatmeal, just add one bag of the mixture to a bowl and add 3/4 cup of boiling water.  Let it sit for a few minutes until it thickens.  Add more or less water, depending on what consistency you prefer.

Simple as can be.  Here are some add-ins that we like:

The Best Groceries to Buy in Bulk