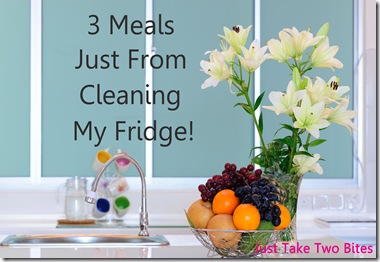 Yesterday I decided to clean out and organize my fridge.  I did this in addition to completing my second task in the 30-Day House Cleaning Challenge that I’m participating in.
I knew I had quite a few leftovers and veggies that I needed to use up—otherwise all of it would have gone into the trash.  I just can’t take the thought of that much food going to waste.  Check out my posts on freezing and uses for apples and freezing fruits and veggies in order to prevent food waste.

In my fridge I found what was left of our crock-pot rotisserie chicken, wimpy looking celery, a half a head of cabbage, some mushrooms, lots of bits of corn and peas left from various meals throughout the week, and some kale.
Here’s what I decided to do with all that stuff:

I started out with the chicken stock.  It is pretty easy to throw together, and I started with it so it could simmer for a couple hours.
I put the leftover chicken bones in my favorite Le Creuset dutch oven

I chopped up my wimpy-looking celery and added half of it to the pot, along with some carrots and an onion.  I added some salt and pepper, brought it to a boil, and let it simmer for a couple hours while I finished up the rest of my projects. 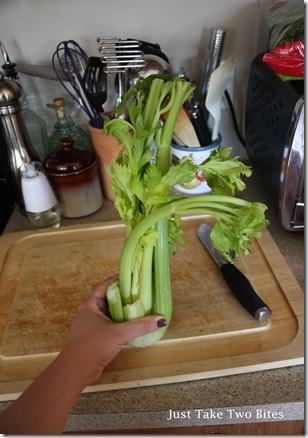 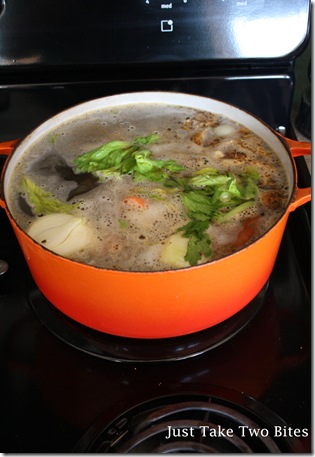 Next, I got my crock-pot veggie soup together.  I had some corn and peas I needed to use.  I didn’t have enough left for a meal, so into the soup they went. 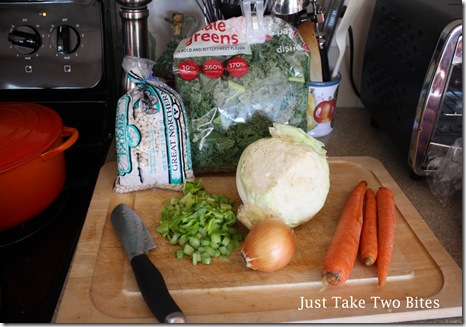 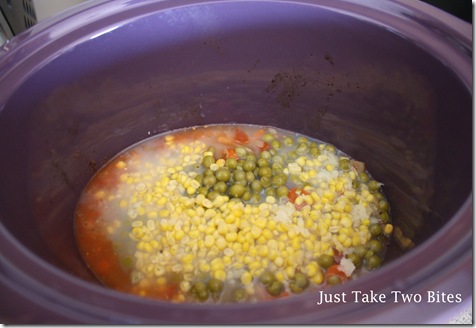 I also threw in some kale, the cabbage, and the rest of my celery.  Kale cooks down and provides so much nutrition to the already healthy soup.  From my pantry, I added some canned diced tomatoes, a can of tomato sauce, some cannellini beans, and some of my essential spices.  On this day, I added onion powder, garlic powder, basil, and oregano.  Finally, I  filled the crock pot the rest of the way with water, added some salt and pepper, and let her rip.  I cooked it on low for about six hours or so.  Later on, I let it cool and put it into smaller containers for the freezer.
While my soup and stock were cooking, I made up some yummy mushrooms.  I learned about these when someone brought them to a Super Bowl party I attended.  They are great for anyone who is on a low carb diet.  Or just if you like mushrooms. 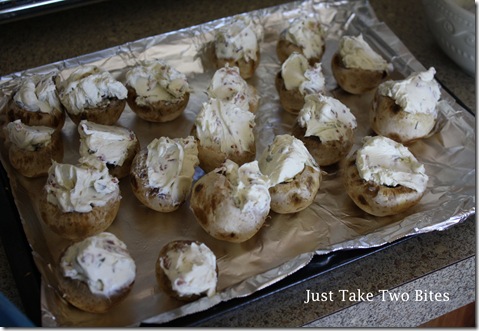 I needed to use these guys up pretty quickly before they got slimy. 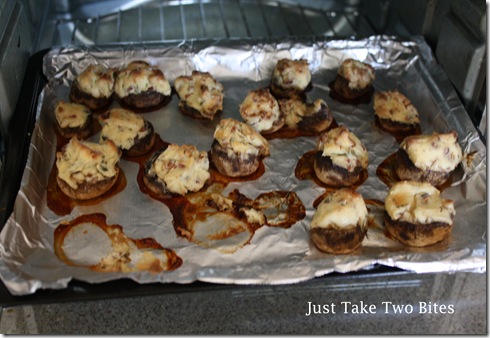 You mix a container of onion and chive cream cheese with a tablespoon of bacon bits (I used a couple strips of really crispy bacon that I diced up).  Once that is combined, remove the stems and add a spoonful of the cream cheese mixture to the mushrooms.  Bake them at 350 degrees for about 20 or 30 minutes.  These are so tasty on a salad, or just eat them plain.  My two-year-old loves these.
So, I was a busy girl in my kitchen.  But nothing went to waste in my kitchen on this day.  That was the best feeling of all!
Oh, but I had a sink full of dishes.  That was the only downfall. 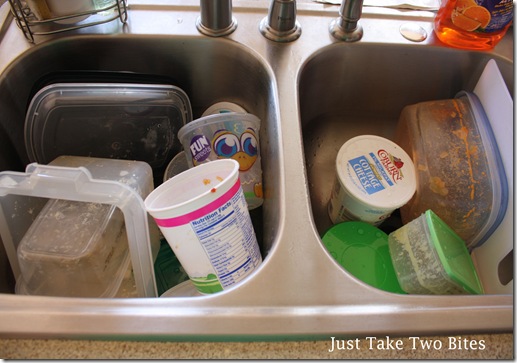 Have you rescued any leftovers lately?  I’d love to hear about it!